To be completely honest, I have no idea about this movie until I saw the trailer last week before How to Train Your Dragon: The Hidden World started. With that being said, yes, I was drawn into this movie solely because of its trailer. But the other reason is because I’m also a big fan of one room thriller. It turns out not quite literally for this movie, but the concept is basically still the same. 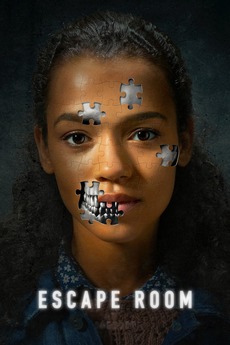 Six adventurous strangers travel to a mysterious building to experience the escape room — a game where players compete to solve a series of puzzles to win $10,000. What starts out as seemingly innocent fun soon turns into a living nightmare as the four men and two women discover each room is an elaborate trap that’s part of a sadistic game of life or death.

As I said before, I’m a massive fan of [su_highlight background=”#f0e7da” color=”#000000″]one room thriller.[/su_highlight] If you have no idea what that means, it’s basically a thriller movie which take place in one area only. It doesn’t necessarily means that it’s a low budget movie, if that’s what you’re thinking. Most of the one room thrillers spent a low budget, it’s a fact. But I think it got its own beauty with how tricky everything is. How can the director and writer keep the audiences’ attention in such small area? There’s no room for exploration, literally. So, it’s very important to keep the story and characters strong. Oh, and how can we talk about thriller if there’s no twist in it? Talk about pushing creativity at its max.

The premise was certainly not a ground-breaker. [su_highlight background=”#f0e7da” color=”#000000″]Escape, or die.[/su_highlight] But here’s the thing. People keep coming and coming for this premise, including me, whether it’s in books or movies. I guess there really is something about watching human fighting for their survival. However, this premise has been filmed many times with many different versions and twists, so don’t set your expectation too high. Although it’s quite entertaining, it’s not strong or memorable enough. You’ll probably forget most of it after 12 hours out of the cinema. Now, let’s get into more details, including plot, characters and my super subjective chatty talks. There will be some spoilers (because how on earth I could rant without explaining the actual rant?!), but don’t worry because it will be hidden until you decided to open it. Escape Room is basically a combination of [su_highlight background=”#f0e7da”]Cube (1997), Saw (2004) and The Cabin in the Woods (2011).[/su_highlight] I could mentioned more movies there and that shows how unoriginal the plot is. And I don’t say it in a bad way. A premise could be use over and over again by executing it differently. Some movies might focused on the emotional attachment over its characters, but others might tried to impress the audience with super high-tech contributions. [su_highlight background=”#f0e7da”]Surprisingly, Escape Room managed to do both.[/su_highlight] And here’s the thing about Escape Room: It’s a less intelligent version of Cube, a duller villain version of Saw and a less gore version of The Cabin in the Woods.

Where Cube depends on the math geniuses, Escape Room actually managed to let more characters involved with each of their different strengths. Not all of them, unfortunately. I feel this is such a waste opportunity because they did amazing by incorporating three characters already, but the other three just… stand there.

Amanda: She’s tough. You can see that since the first second of her appearance. And turns out, her military experience came in handy for the group.

Ben: He doesn’t really do anything significant for the group. His only input is sarcastic commentary and smokes pollution.

Danny: Our geeky fanboy! I love him, especially when he’s in his fanboy mode. Thank God for him and his knowledge about this type of game, even though it’s probably not as useful as we thought at first.

Jason: He’s a successful Wall Street dude and has a negative vibes going around him. He’s a smart talker, and his expertise is in bullshitting.

Mike: Good guy Mike. Poor Mike. He’s only in because his ‘nephew’ signed him up and he needs the money. Fishing skill never been more important.

Zoey: Sweet girl Zoey. Smart yet shy. The group should thank her for her attention to details. I love her character development the best. [/su_spoiler] Talking about characters, I realized what’s actually missing from Escape Room is the villain. Don’t be silly. Of course there’s a villain in this movie. Even though we have no idea whether it’s an individual psychopath or a group of scientist gone mad. But what’s missing is the villain’s motivation. [su_highlight background=”#f0e7da”]A villain couldn’t be evil enough if you don’t know his motive.[/su_highlight] Saw, for instance. Aside from its glorious traps and gore scenes, what drives you in? Jigsaw’s motive! You want to know why he became the bad guy. You want to know his pain. And when a movie deliver a villain that could be understand by audience, or even loved, that’s what makes it remarkable.

From the beginning, I think it’s pretty clear this ‘room’ was set by an organized institution. And well funded, too. At the end, they didn’t reveal the villain’s face neither their motives, but instead showed us a very much possible sequel. [/su_spoiler]

However, my favorite thing about this movie is its ability to deliver such [su_highlight background=”#f0e7da”]high suspense with a very minimal gore scenes.[/su_highlight] I mean, The Cabin in the Wood was basically a blood bath and Escape Room was really clean, if you insist for a comparison. Oh, and I almost forgot to mention about their crazily loud and heart pounding sound effects. Now that I’m thinking about it, these sound effects are the ones that did all the dirty works instead of the gore effects. So, big props for Brian Tyler and John Carey! Here you can check the entire soundtracks used in this movie!

And now that we talk about technical, this movie was surprisingly cinematic. They really put A+ efforts for the room’s setup and properties. Honestly, I never really expected such beauty to be delivered from this sub-genre. And I gotta admit it, it did feel magical in a few scenes. With few good points among the bad, I wouldn’t categorize this movie as a failure. It’s a decent light suspense that will makes your heart pounding just enough, but also laugh because of its sarcasm and comedic bits. If you want to read the complete plot summary and don’t mind the spoilers, you can read it here.

[su_heading size=”14″ margin=”5″]Have you watched this movie? If you haven’t, does my review makes you want to watch it? Or leave it?[/su_heading]