Hey everyone! I’m back with another book review post. This time, I got the opportunity to be a part of Losing Normal by Francis Moss blog tour, which organized by Xpresso Blog Tours. This blog tour will be consist of author interviews, excerpts, guest post and also review post and you can check out the post from the other hosts here. I received a free copy of this book in exchange for an honest review. When I read the book summary, I knew I can’t resist it since I’m a big fan of dystopian fiction. And here’s my review!

Everyone we love, everything we know, is going away… and only an autistic boy can stop it.

Alex knows exactly how many steps it takes to get from his home to Mason Middle School. This is normal.

Alex knows the answers in AP math before his teacher does, which is also normal.

Alex knows that something bad is coming out of the big screen in his special needs class. It’s pushing images into his head, hurting him, making him forget. Alex pushes back, the screen explodes, and nothing is normal any more.

Giant screen televisions appear all over the city. The programming is addictive. People have to watch, but Alex cannot.

Sophie, the sentient machine behind all this, sees the millions and millions of eyeballs glued to her and calls it love. To Sophie, kids like Alex are defective. Defectives are to be fixed… or eliminated.

If you know me, I’m always all in when it comes to dystopian/post-apocalyptic story. If you don’t, well… know you do, right? 💁‍♀️ Losing Normal is not quite a post-apocalyptic story. It’s rather a toward-apocalyptic story if that makes sense? Apparently, our technology keeps evolving and it’s about time where the sentient machine (in this case, an artificial intelligence called Sophie) is taking over the world by controlling the human mind through screens. Little did she (or it?) know, not every human being can be controlled the way she wanted to. And here comes Alex, the autistic teenager that fights back this technology.

✅ Autism representation. I’ve been trying to do more exploration with my readings and that includes to read more diverse characters. This book has a good representation of autism on Alex, its main character. We are able to see how Alex mind works and how his autism affected his actions. And not just his actions, but basically the whole story.

✅ A super dynamic story. Everything happened really fast and full of actions. This is the kind of book that will bring you from one scene to another without really allowing yourself to take a breath. It’s that intense.

✅ Solid messages and values. This book illuminates current issues that have been happening in our society. The using of technology might be very useful in our life at the moment, but we can’t deny that we are also experiencing side effects like technology addiction. The AI take-over is something that can happen to use in the future and I think it’s great for the author to increase awareness on this particular area, even when this book is labeled as a work of fiction.

Few things that I don’t like about this book:

❌ Too fast + technical. This is probably just my issue, but I was struggling to follow the story as the writing is full of computer-based and technological terms that I’m not completely familiar with. This becomes even harder because the story went super fast and I feel overwhelmed to keep up with everything that happened.

❌ Lack of characters depths. Because this story is very plot-driven, it didn’t give as much attention to its characters. With its multiple POVs, which I usually have no problem with, it was a challenge to follow the story, because there are no particular differences between these two characters/POVs. I can’t really sense their personality differences since the writing made them sounds like almost the same person.

However, if you’re a fan of technology gone bad & taking over the Earth, or just a binge-watcher of Black Mirror, I believe you’d enjoy this story. It’s a decent piece that will constantly put you on the edge! 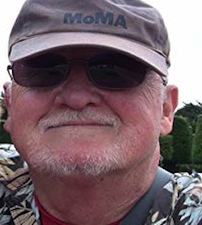 Francis Moss has written and story-edited hundreds of hours of scripts on many of the top animated shows of the 90s and 00s. Beginning his television work in live-action with Buck Rogers in the 25th Century, he soon starting writing cartoons (“a lot more jobs, and also more fun”), staff writing and freelancing on She-Ra, Princess of Power, Iron Man, Ducktales, and a four-year stint on Teenage Mutant Ninja Turtles, writing and story-editing more episodes than you can swing a nuchaku at.

One of his TMNT scripts, “The Fifth Turtle,” was the top-rated script among all the 193 episodes in a fan poll on IGN.COM. A list of his television credits is at IMDB.COM.

Francis, in partnership with Ted Pedersen, also wrote three middle-grade non-fiction books: Internet For Kids, Make Your Own Web Page, and How To Find (Almost) Anything On The Internet. Internet For Kids was a big success, with three revised editions and twelve foreign language versions. He’s the sole author of The Rosenberg Espionage Case.

After high school where he grew up in Los Angeles, Francis had one dismal semester at a junior college, and then enlisted in the Army. He became a military policeman and served in Poitiers, France, falling in love with the country, taking his discharge there and traveling around Europe (including running with the bulls in Pamplona) until his money ran out.

He attended the University of California, Berkeley and became active in the civil rights and anti-war movements, still managing to earn a BA and an MA in English lit (“the major of choice for wannabe writers”).
Francis is married to Phyllis, a former music teacher and active viola player. They have a son, a daughter and one grandson. They live in Joshua Tree, California.

Are you a fan of dystopian/post-apocalyptic book? Have you read Losing Normal?