Skip to content
After gaining a major success as a creator of the award-winning podcast, The Bright Sessions, Lauren Shippen is ready to bring you back the thrilling story and twisted universe featuring your favorite Atypicals through her debut novel, The Infinite Noise. 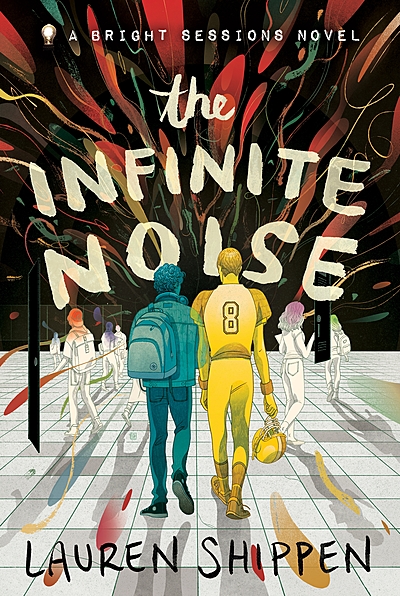 The Infinite Noise by Lauren Shippen

Caleb Michaels is a sixteen-year-old champion running back. Other than that his life is pretty normal. But when Caleb starts experiencing mood swings that are out of the ordinary for even a teenager, his life moves beyond “typical.”

Caleb is an Atypical, an individual with enhanced abilities. Which sounds pretty cool except Caleb’s ability is extreme empathy—he feels the emotions of everyone around him. Being an empath in high school would be hard enough, but Caleb’s life becomes even more complicated when he keeps getting pulled into the emotional orbit of one of his classmates, Adam. Adam’s feelings are big and all-consuming, but they fit together with Caleb’s feelings in a way that he can’t quite understand.

Caleb’s therapist, Dr. Bright, encourages Caleb to explore this connection by befriending Adam. As he and Adam grow closer, Caleb learns more about his ability, himself, his therapist—who seems to know a lot more than she lets on—and just how dangerous being an Atypical can be.

Thank you Tor Teen and NetGalley for providing me with an advanced reader copy in exchange for an honest review. The Infinite Noise will be published on September 24, 2019 and will be available on Amazon, Book Depository, and other book retailers.

The Infinite Noise follows the story of Caleb Michaels, who had a pretty normal life as a high school footballer, until one day he discovered himself as an empath, an Atypical who could sense people’s feelings, and suddenly, life was not so normal anymore. Enter Adam Hayes, the bright yet quiet classmate of Caleb, who’s feeling was too big and deep, making Caleb overwhelmed as he found himself helplessly drowning in it. This is a story of self-discovery, a coming-of-age love journey, and maybe, one or two sessions of superhero-only therapy.

I discovered the glorious universe of The Bright Sessions last month, right after reading the synopsis of Shippen’s debut. Looking at all of the exciting commentaries about this upcoming release which coming from fans of the original podcats, of course, I started listening to the first episode right that second. I’m glad to tell you that surprisingly, although it was my very first storytelling podcast, I truly had a great time. My initial intention was to listen to the whole podcast before I jump into this book, but unfortunately, I couldn’t do it in time. So, I ended up in the middle of season three when I started reading this book and here how it goes…
Obviously, after listening to the podcast and memorize the voice of the characters by heart now, reading them on paper was so much easier and exciting. The book was following the exact plotline of the podcast, but don’t let this intimidate you, because you totally don’t have to listen to the podcast to enjoy this story! However, I’d say listening to the podcast will help you to dissolve quicker in these characters’ inner monologues and struggles.
Unfortunately, as much as I enjoyed the podcast, I couldn’t get the same feeling from this book. Don’t get me wrong. Caleb and Adam were my favorite characters in the podcast and it was exciting to be able to read more of their thoughts in this story, something that does not exist in the podcast.
During the first encounters of both of their point-of-view, it was thrilling. For Caleb, I enjoyed how he grows into his superpower. His narrative was fun to read, especially the way he used visualization to make more sense of how his power works. Meanwhile, for Adam, I’m grateful to see more of his personality through the reflection of his struggles and thoughts. But after the endless back and forth POV’s changes between these two, they started to sound almost similar and even the pace started to feel dragging, especially from the middle towards the end. It was understandable that since both of them are still teenagers and they were having difficulties to communicate with each other, they will need some time to figure things out. Yet, I personally found that it took too long for them to resolve their issues and the sole reason for their conflict was because Caleb keeps shutting his mouth in the middle of a sentence to keep his secret and Adam keep asking stubborn oblivious series of questions that stressing out Caleb.
And remember when I said that the pace started to feel dragging? It was especially because from the beginning until around 80% of the story, it only focused on three main characters (aside from family members and other classmates), and suddenly, it delivers other ‘important’ characters out of nowhere, that also brings other crucial plots along with their appearance. Which of course, will not be a big problem if you’re listening to the podcast already, but even as the podcast listener, I found this addition as too rushed and sudden. It was as if Shippen didn’t consider that there are readers who’re not aware of the podcast and just delivered chunk on important information without a proper warm-up.
Although it was an enjoyable ride, The Infinite Noise was a high-anticipated debut that doesn’t really meet its expectations. Aside from its extraordinary superhero concept and detailed worldbuilding, the character development and their genuine relationship captivated me to keep reading this story until the very last page.

Do you listen to The Bright Sessions? Are you thinking about adding The Infinite Noise to your next reading list?